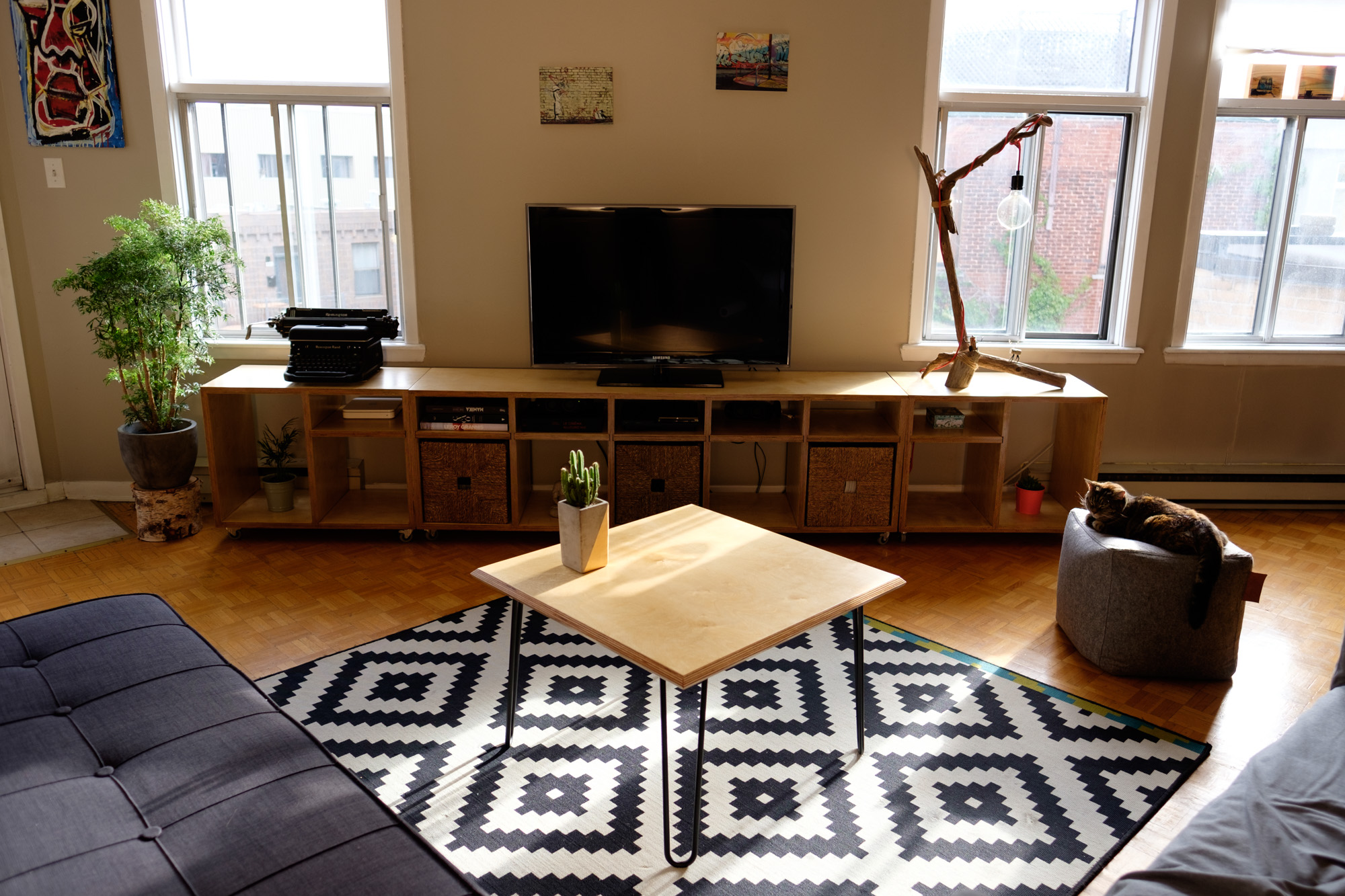 Adrien is a friend I met in Montreal but who also grew up in France. We both moved in our early twenties and like many fresh immigrants settling down, Ikea seemed like a reasonable first touristic attraction to visit. Adrian even practiced the subtle art of "Ikea hacking". In his living room, a KALLAX shelf was proudly enthroned between 2 LACK tables, making a quite unique TV stand. Ikea is great for a first start; But let's be honest, it comes a time when we grow tired of it and just can't stand the view of it anymore. That time had come and we decided to design and build him a new TV stand and coffee table that he would be proud of.

There isn't much to say about the old setup. KALLAX is too high for a TV. LACK & LACK themselves look like they have no idea why they are here. The animation below gives a good idea of the before/after:

The main focus while designing a replacement was to have a flat surface that runs for about 12 feet. And because 12 feet would make for a crazy long piece to move, we decided to split it in 3 independent parts. To add to the modularity, we decided to put the 3 pieces on casters. It will be easier to roll the side pieces around and use them for something else: an extra chair, an extra table, a tray...

The second focus was to keep the modularity of the Ikea system and reuse the cubes Adrien already owns. We hesitated between 3 identical pieces that would have been 3-cubes-wide (about 43 inches) each or one central 5-cubes-wide (about 72 inches) piece and 2 side 2-cubes-wide pieces (about 30 inches). The latter looked a lot more balanced so we went with it.

Finally, we made the pieces 24 inches high including the casters. That way they arrive right under the window frames and have two compartments, one that is about 13 cubic inches (for the cubes) and on that is about 5 inches high; which is perfect to store a PlayStation, some books or the controllers.

The pieces are made of 1-inch thick Baltic Birch plywood, mostly because it is a rather inexpensive way to make furniture and it looks good. But the reason we will give to people asking is because those lines on the edges are really gorgeous; it really adds a touch to an otherwise rather simple design! The entire assembly is made with rabbet joints, which is a simple yet strong joint. It also creates a neat intersection between the edge lines of the plywood (see third picture below).

We made the shelves removeable so it is lighter to move and more versatile. It is possible to store things that are more than 13 inches high if necessary: a subwoofer, speakers or a plant. To break the monotony (read because we made a mistake cutting the shelves), the two side pieces have only a single shelf. It is always pleasant to turn a mistake into a feature that ends up looking good.

Adrian also wanted to replace his coffee table. We chamfered (the angle on the edge) a 30 inches square piece of 1-inch-plywood on wich we put 4 hairpin legs. It is simple yet elegant. We gave the table the same natural finish as the TV stand, 3 coats of Livos Kunos 244. 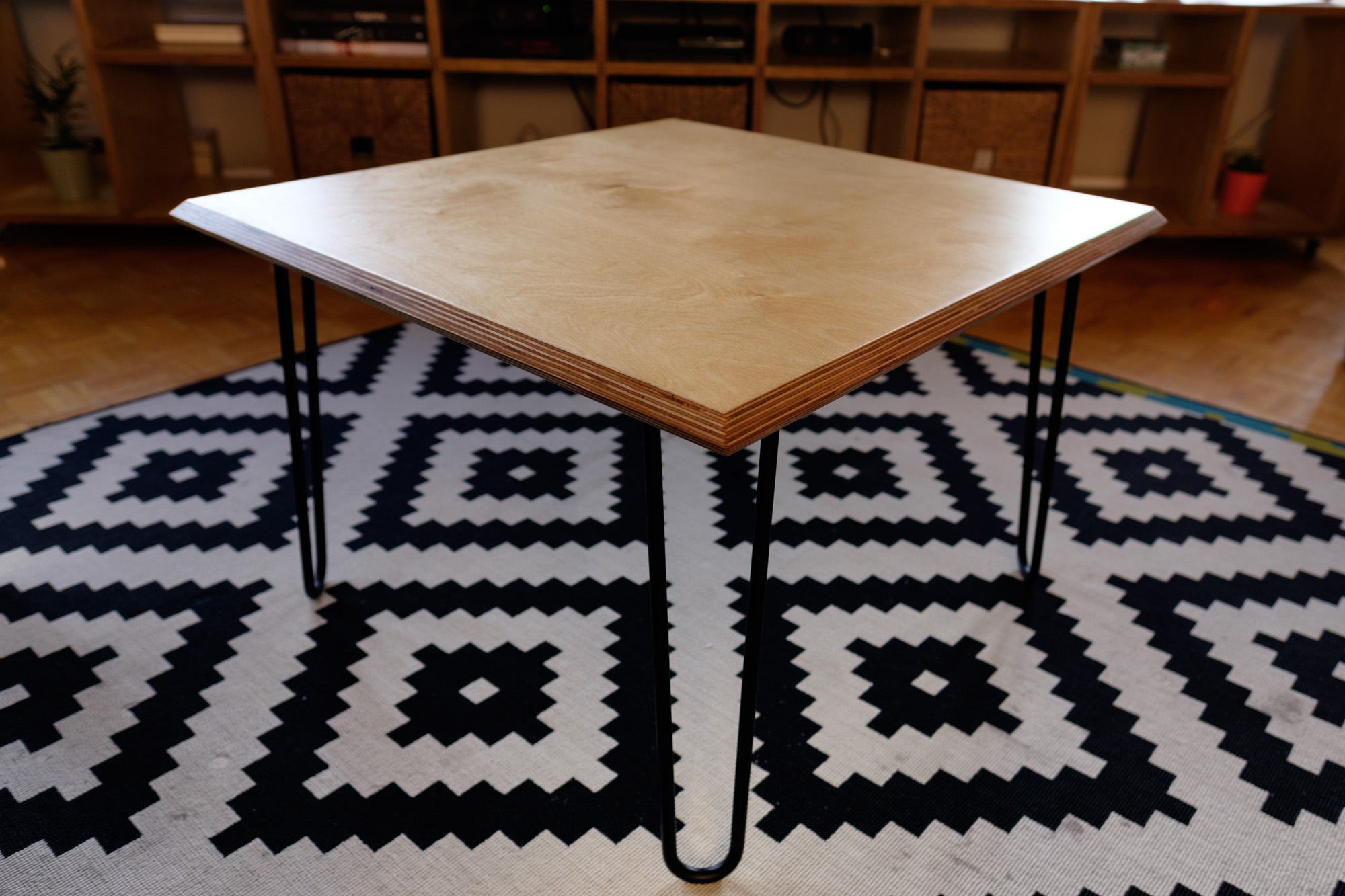 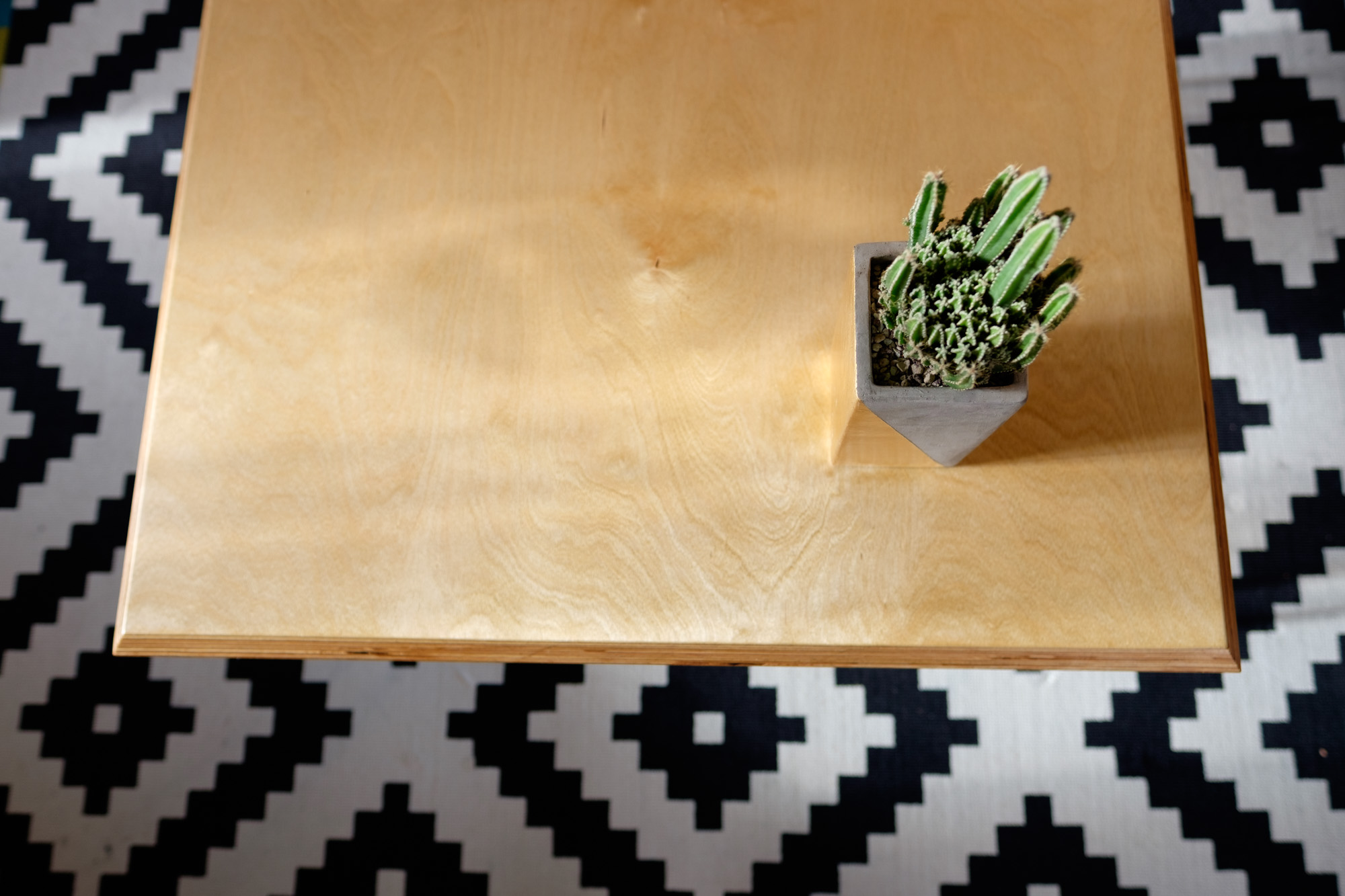 The goal with this table was really to play with the edge lines of the plywood and create an aerial piece. I'm considering running a production batch of these so you are interested in getting one or need some custom furniture for your home, I'd be more than happy to chat!

And on that note, I will leave you with couple pictures of Adrien and I working at the shop. I usually build furniture alone but Adrien wanted to participate and I'm glad he did because some assemblies ended up being a lot of work: